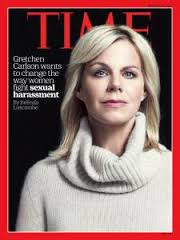 Gretchen Carlson, Minnesota native and former Fox News star, is featured in an article by Time Magazine on her fight against sexual harassment at work. Carlson was sexually harassed by her boss, Roger Ailes, then Chairman of Fox News. Since taking her legal claims public, she has been a role model for victims of sexual harassment across the U.S. Carlson is quoted in the article, saying “I think this is happening every single day to women in all walks of life and in all different types of corporations. I’ve heard from so many women, from Wall Street to a tiny little town in Alabama. It’s everywhere.”

Carlson’s story helps shed light on the pervasive problem of sexual harassment in employment settings around the country. Sex discrimination, and sexual harassment, remain very real problems in Minnesota and in nearly every city and state in America.

Carlson is also speaking out against forced arbitration in employment agreements and employee handbooks. She has agreed to testify to congress about the problems of forced arbitration. Says Carlson, “It is a huge problem. Because it’s secret. And it plays into why we think that we’ve come so far in society and we probably really haven’t—because we don’t hear about it.”

If you have questions about sexual harassment, have been harassed at work, or would like to learn more about the fight against forced arbitration, contact Teske Katz Kitzer & Rochel today.

Equal Pay Laws Necessary Tool In Fight Against Gender Pay Gap
The Supreme Court Weighs in on COVID-19 Vaccines: What It Means for Employees
Minnesota is an At-Will Employment State, What Does That Mean?
Can My Employer Fire Me for Reporting Violations of Law?
What to do if you experience sexual harassment at work
How Do I Know If I Can Request FMLA Leave?
Phillip Kitzer Moderates Panel on Race and Religious Discrimination at Federal... Teske Katz Kitzer & Rochel Brings Class Action Employment Lawsuit against...
Scroll to top