The National Employment Lawyers Association (NELA) holds a special conference for its Eighth Circuit Chapter once every two years. The 2022 conference was held on October 14-15, in St. Louis, MO. NELA is the largest organization of lawyers who represent workers in the United States and is focused exclusively on advancing employee rights and making the workplace better for all Americans.

The Biannual Eight Circuit NELA Conference provides several days of intensive, high-quality continuing legal education (CLE) training for employment lawyers. Both Phillip Kitzer and Brian Rochel were honored to be invited to speak at the Conference.

Phillip presented on the Conference’s lead panel, along with co-presenter Frances Baillon. Phillip and Frances discussed the latest updates to employment-related cases throughout the Eighth Circuit and the Supreme Court.

Brian, along with co-panelists Paige Fiedler and Kevin Baldwin, presented on a panel titled, “Valuing Emotional Distress Damages.” The panel provided an animated discussion among seasoned employment lawyers on the topic of valuing a plaintiff’s emotional distress throughout a case.

If you feel you have experienced discrimination, harassment, or retaliation related to your employment, contact us at Kitzer Rochel. Our experienced employment law attorneys would be happy to discuss your case and help you understand your legal rights and options.

Partners Phillip Kitzer and Brian Rochel each received the directory’s distinguished honor of “Labor and Employment Star,” as recognized by peers and members of the labor and employment law community.

Click here for more details about Phillip Kitzer and Brian Rochel. If you have questions about employment law or would like to learn more about Kitzer Rochel, please contact us.

Since its inception in 2008, Benchmark Litigation has been the only publication on the market to focus exclusively on litigation in the US. The Benchmark brand has grown dramatically and garnered industry-wide accolades as the definitive hub for in-depth analysis of the players shaping the dynamic practice of litigation.

The National Employment Lawyers Association (NELA) held its Annual Convention in San Francisco, California from June 30 through July 3, 2022. NELA is the largest organization of lawyers who represent workers in the United States and is focused exclusively on advancing employee rights and making the workplace better for all Americans.

The Annual Convention is the largest meeting of NELA members each year. The Annual Convention provides several days of intensive, high-quality continuing legal education (CLE) training for employment lawyers. Both Phillip Kitzer and Brian Rochel were invited to speak at the Convention—an honor that very few members are given.

Brian presented on a panel entitled “Staying Organized in Litigation.” The panel provided detailed tools and strategies for plaintiff’s advocates to use in their practices to increase organization and litigation skills.

Phillip presented on a panel entitled “COVID-19 Claims for Workers.” The panel provided in-depth updates on the state of employment law as it relates to the COVID-19 pandemic. The panelists covered the rapidly evolving area and discussed the latest laws, statutes and case developments.

Phillip and Brian regularly speak on employment law topics and present around the country. If you have questions about employment law please do not hesitate to contact us.

On February 27, 2019, the Minnesota Supreme Court issued a major decision in favor of employees. The case, Daniel v. Minneapolis, addressed whether an employee who is disabled as a result of a work injury can bring a claim under the Minnesota Human Rights Act (MHRA). For decades, such employees were prohibited from filing MHRA claims because of a prior supreme court ruling in Karst v. FC Hayer Co., Inc. (issued in 1989). Under Karst, disabled employees were prohibited from bringing human rights claims because they were preempted by Minnesota’s Workers’ Compensation Act. Consequently, any employee who experienced disability discrimination resulting from a work injury was left without any recourse to remedy the discrimination.

This led to absurd results. For example, if an employee suffered a disabling injury outside of work, she would be protected from discrimination under the MHRA. But if that same employee became disabled at work, she would have no protection from discrimination. Her employer would be free to fire her because of her disability and nothing more. This was bad policy for Minnesotans and was out of step with the rest of the country, with nearly every state rejecting similar interpretations of their own state laws.

In Daniel, the Minnesota Supreme Court corrected that problem and overruled the Karst decision. Writing for a 5-2 majority, Justice Margaret Chutich wrote, “Unlike the workers’ compensation act, the human rights act is a civil rights law that protects employees from unlawful employment discrimination.” The Court recognized the fundamental difference between the Workers’ Compensation Act, which is designed to remedy work injuries, and the MHRA, which is designed to protect disabled employees from discrimination. Because of these differences, neither law preempts the other. Instead, workers have rights under both.

Teske, Katz, Kitzer & Rochel lawyers Phillip Kitzer and Brian Rochel wrote on behalf of the Minnesota Chapter of the National Employment Lawyers Association in a “friend of the court” or amicus brief, asking the Supreme Court to overrule the Karst decision. “This marks a great step forward for all employees in Minnesota and corrects a decades-long error in the law,” said Phillip Kitzer. “Employees should not be treated differently and denied equal protection simply because they become disabled as a result of a work injury. That is not consistent with Minnesota’s strong history of protecting and advancing human rights,” added Brian Rochel.

Many people mistakenly believe that an employee cannot be fired for exercising their rights to free speech. For most employees, that is simply not true.

The First Amendment to the United States Constitution generally protects citizens from government retaliation for speech. It provides that “Congress shall make no law . . . abridging the freedom of speech.” Private employers, however, are not prohibited by the First Amendment from terminating the employment relationship based on speech. In fact, many employers do terminate employees for engaging in “free speech.” Because nearly every state in the country is an “at-will employment” state, employers are generally entitled to terminate the employment relationship “at will,” or for any reason they wish. While there are exceptions to the “at-will” doctrine (such as race discrimination or firing someone for certain types of whistleblowing), firing an employee for what they say outside of work is usually not illegal.

In the private sector, unions have historically provided the “rights” that many employees believe they have at work. When unions negotiate contracts on behalf of many employees, they usually negotiate that employers are limited in the reasons they can terminate an employee. Likewise, certain high-level employees are often provided employment contracts that restrict the reasons for terminating an employee. But because only around 6% of private-sector employees belong to unions, and very few employees have an employment contract, most employers can legally terminate an employee because of what they say outside of work.

Ask Juli Briskman. Ms. Briskman became famous for a photograph taken of her when she gave the President a one-finger salute as he drove past in his motorcade. Her employer, Akima LLC, terminated Ms. Briskman’s employment for violating the company’s social media policy. Ms. Brisman sued Akima by arguing that a public-policy exception should exist to the at-will employment doctrine. But the Virginia Court dismissed her case for failure to state a legal claim.

Similarly, a white nationalist was fired from his job as a welder and mechanic after appearing in the New York Times at a white nationalist rally in Charlottesville, Virginia. The company, Limestone & Sones Inc. posted a statement on its Facebook page stating they “would like to take this time to assure our friends and customers that we do not condone the actions of people involved in this horrific display that has taken place in Charlottesville.”

If you have been fired for engaging in “free speech,” and would like to know more about your rights, contact an attorney at Teske Katz Kitzer & Rochel today.

On April 6, 2018, Phillip Kitzer participated on a panel at the 8th Circuit chapter of the National Employment Lawyers Association’s (NELA) biennial convention in Minneapolis, Minnesota on transgender rights in the workplace. Along with co-panelists Joni Thome, Ferne Wolf, and moderator Jill Silverstein, the panel discussed trends in the law, litigation strategies, and best practices to identify issues and protect the rights of transgender clients. The Eighth Circuit NELA Conference is a two-day conference designed for attorneys and professionals who represent employees and features presentations by leading plaintiffs’ lawyers in the Eighth Circuit.

Teske Katz Kitzer & Rochel’s attorneys regularly represent employees in employment disputes. If you have questions about employment law, or would like to learn more about your rights in the workplace, contact us today.

On June 15, 2016, Brian Rochel and Phillip Kitzer presented at the Minnesota Counties Intergovernmental Trust’s (MCIT) seminar, Advanced Employment Issues for Public Entities.  The presentation, titled The Intersection of Disability, FMLA and Workers’ Compensation Retaliation Laws, addressed the complications for employers when employees request accommodations related to a disability or work-related injury, or when employees request time off related to a disability, workers’ compensation injury, or FMLA leave.

The MCIT is an entity composed of Minnesota counties and public entities that provides risk management and loss services to its members.  The Advanced Employment Issues for Public Entities seminar was a full day of training for human resources professionals that examined emerging workplace concerns.  Mr. Rochel and Mr. Kitzer primarily represent employees in workplace disputes, but presented to human resources employees multiple examples of mistakes they commonly see made by employers that lead to wrongful termination lawsuits.

NELA’s Eighth Circuit conference is held every two years, and draws employment lawyers from throughout the Upper Midwest. This years’ conference was held in Kansas City, Missouri. Mr. Rochel was invited to speak on a panel that addressed employment law issues unique to the Lesbian, Gay, Bisexual, & Transgender communities. Mr. Kitzer spoke on the issue of dealing with abusive and harassing litigation tactics.

On October 26, 2015, Teske Katz Kitzer & Rochel partners Phillip Kitzer and Brian Rochel presented a continuing legal education (CLE) seminar on the intersection between disability discrimination laws under the Minnesota Human Rights Act (“MHRA”) and the American’s With Disabilities Act (“ADA”), the Family and Medical Leave Act (“FMLA”), and Workers’ Compensation retaliation (“WCA”).  The presentation was moderated by Teske Katz Kitzer & Rochel partner Doug Micko, and addressed the complicated legal considerations faced by both employers and employees when an employee has a workplace injury or disability.  The  presentation was made as part of Minnesota CLE’s Employment Law Webcast Series.

Brian Rochel was presented the “Author of the Year Award” by the Labor & Employment Section of the Federal Bar Association’s (FBA) at its annual meeting in Salt Lake City, Utah. The award was given to Brian “in recognition of deep appreciation for outstanding contributions to Section publications.” Brian served as a volunteer editor of the Section’s monthly Circuit Updates, co-authored the Circuit Update for the Eighth Circuit along with Teske Katz Kitzer & Rochel partner Phillip Kitzer, and also co-authored an article for the Labouring Oar in spring 2015, also in conjunction with Phillip Kitzer.

Brian was also named the Co-Chair of the Publications and Public Relations Committee of the Labor & Employment Section at the FBA annual meeting as well. Teske Katz Kitzer & Rochel congratulates Brian for his hard work and dedication to the labor and employment field. 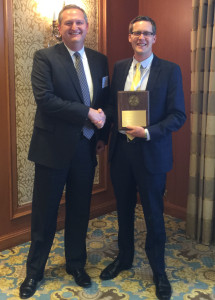